I remember to have been named

I remember to have been called

I am now calling myself

an ongoing project by jee chan and stefan pente

responding to the botanic garden and the botanical museum in berlin as what they are. monuments celebrating coloniality and whiteness. 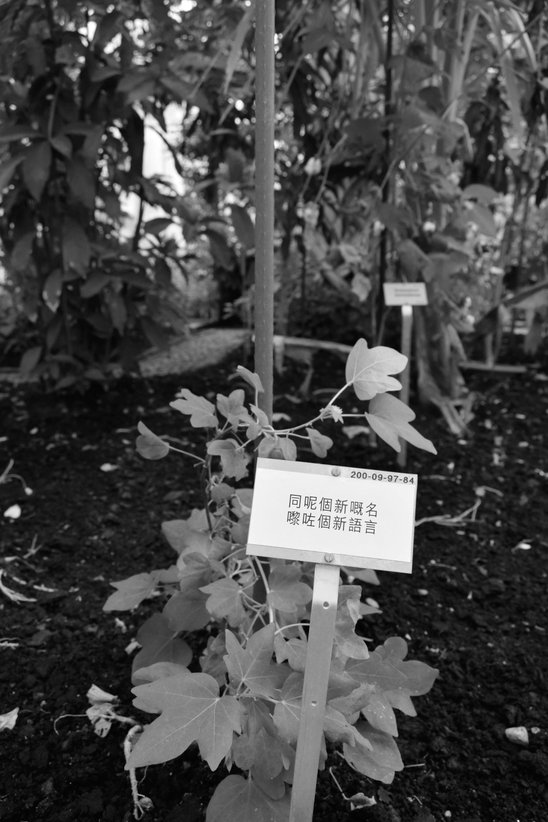 a variation of this work was also published in BEYOND REPAIR, edited by ernest ah and natascha sadr haghighian 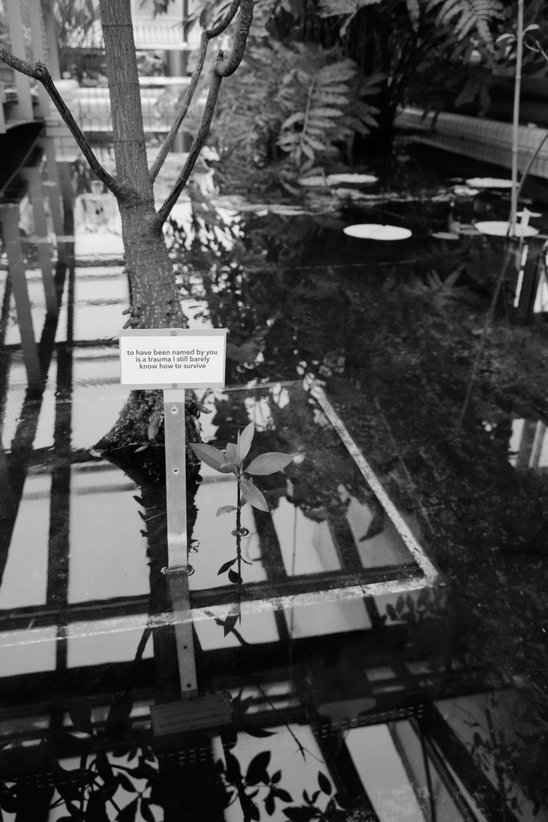 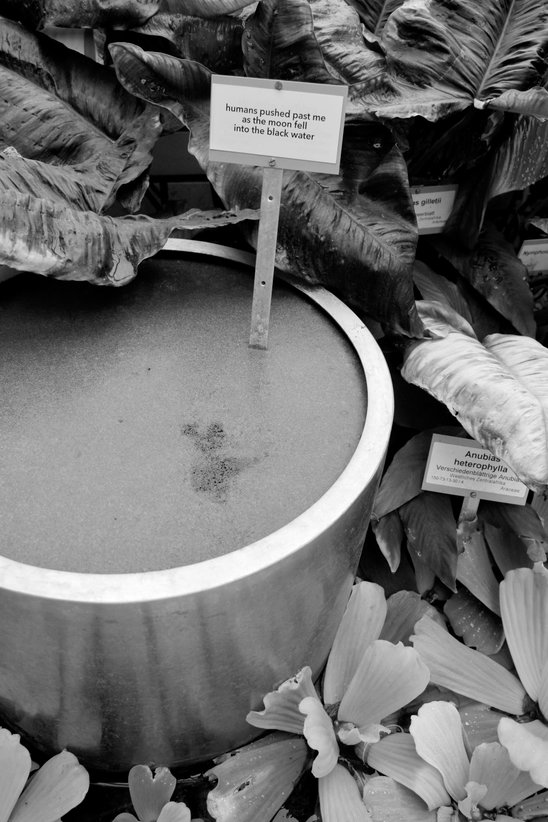 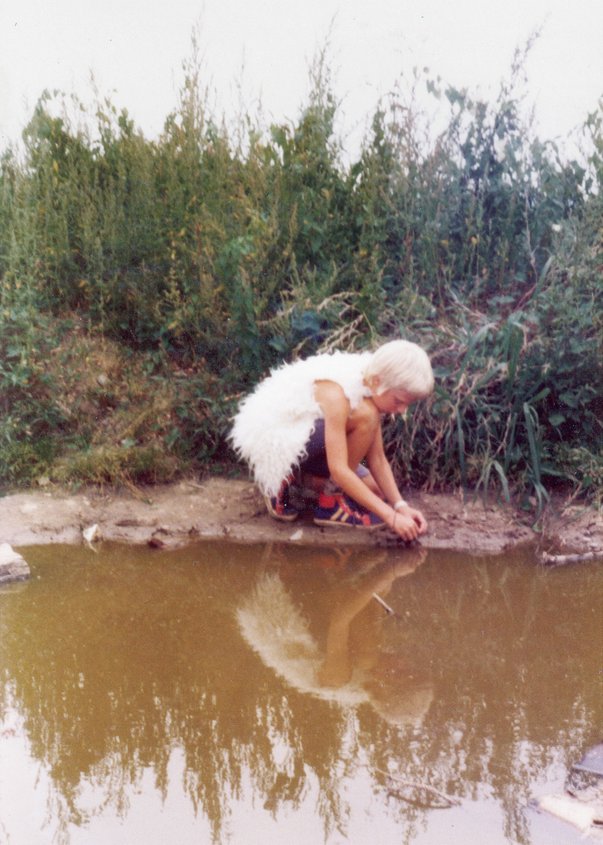 an afternoon in summer 1974. following the invitation of her son, the photographer comes out onto a clearing in the brushwood. she is using a compact camera. she has to estimate the distance between herself and her subject and then adjust the focus, using three small icons engraved on the zoom lens: a face for a close-up, a walking person for a medium long shot, and a mountain range with a group of trees for a wide shot. the photographed scene takes place somewhere between the first two given choices of distance, and the picture comes out a little bit blurry. only one photograph is taken.

the boy decides to separate himself from the photographer through a body of water, dissociating the photographed subject—himself and the nature he is siding with—spatially from the position of the onlooker’s gaze. he turns his shoulder away in a self-confident attempt to ward off further visitations. maybe he borrowed this gesture from an anthropological visual vocabulary he might have subconsciously picked up from some of the book club coffee table books, the national geographic and other publications present in the family home that show foreign people or exotic animals and plants in their natural habitat. depictions of undisturbed subjects absorbed in their own matters, seen by cameras positioned outside of the context of the depicted.

or maybe the boy’s pose, avoiding the onlooker’s gaze, is his own spontaneous, instinctive enactment of an old gesture of occultation, invoking magic to summon his own non-presence. is it a combination of all of the above? is his refusal to return the gaze of the photographer—and consequently the future beholder of the image—an act of resistance against recognition and identification by the viewer? is it an attempt to escape registration?

the boy must know that his portrait’s first destination is the next empty page of the family album, soon to be followed by newer entries, as time will progress. it will be just one photograph in a succession of images. snapshots of family members and friends, most of the time posing in front of various backgrounds both indoors and outdoors, usually looking at the camera or, by way of exception, looking in the same direction as the camera, redirecting the gaze of the onlooker towards a sight worth seeing. this photograph is taken to become memorabilia in a collection that is also an inventory and an indicator of progress. it will be part of a narrative that unfolds hand after hand, picture after picture, constructing linearity, a sense of origin, belonging, and family history. a record of time passed as well as a means to predict the future.

musing over this piece of nature the boy decides to be together in an image with, he must be aware of his separateness from this nature. here, on the edge of the fast-growing swiss suburb where nature is thought of with disturbing ambivalence—one piece of land after another is wrenched from farmland, marsh, and forest for each new house with brute force by people, who do so to live close to nature—the boy chooses to be on the other side. he decides to be photographed with a vanishing place.

he might be longing for or empathizing with something untouched, wild, and solely natural. a time, place, and life he has not yet experienced but seems to remember. maybe because this longing is linked to a sense of loss—growing up and hence losing the ability to ever be wild and part of nature—he imagines the natural to be something embedded in the past. his fur-vested enactment of human wildness is perhaps an intentional but also still subconscious expression of a strong discontent with his present and foreseeable future.

“Did you ever tell her?”

“If we spoke about my queerness? No, never explicitly … but I think she knew all along.”

“Yes, it wouldn’t surprise me … your grandmother was already different herself.”

The ancestral village of the 曾 (Chan) family is 曾厝垵, 思明, 夏门市, 福建省, 中国 (Siming, Xiamen / Amoy, Fujian Province, China). The Chans are Hokkiens and have been in Singapore since the early nineteenth century. The patriarch and matriarch of the Chans were Chan Cheng Wah m. Chia Gin Tee (d. February 7, 1937). They had three sons and two daughters and were Peranakans in their lineage, dressing, and practices, especially in the traditions that they handed down to their children and grandchildren.

This last paragraph is an adaptation of Chan Eng Thai’s efforts at constructing a family tree. This same person, together with a person named Fong Thin Foong, named me Chan Teck Guan Egan. My given name is comprised of 曾德源 (Chan Teck Guan) and a baptismal name, Egan. Chan Eng Thai’s family were practicing Taoists until he decided to convert to Catholicism after being educated at Saint Patrick’s School—one of the many Catholic mission schools that took root in colonial Singapore. Fong Thin Foong also converted to Catholicism upon getting married.

On July 4, 2019, Chan Eng Thai told me that his parents welcomed his conversion to Catholicism. There was a multitude of Taoist festivals that the family had to adhere to, involving extensive preparations and often laborious rituals. They thought that it was far more efficient to have to go to church once a week for an hour or so to continue to receive spiritual protection from a god.

My parents, amid circumstances unknown to me, were acquainted with a Catholic priest called Liam Egan (1925–1994). He had moved to Singapore from Ireland as a Jesuit missionary and passed away on April 7, 1994. On October 29, 1994, I was born into the Catholic church and named after him.

At the age of 16, I undertook a rite of confirmation into the Catholic church. As part of this rite, I adopted a new name, Xavier, after Francis Xavier (1506–1552), who co-founded the Jesuit order. He led extensive evangelical missions throughout Asia, from Goa to Malacca to Japan, eventually coming to be known as “Apostle of the Indies.” He was the initiator of the Goa Inquisition, conducted by the Portuguese colonizers in India, that lasted more than 250 years and institutionalized the religious persecution and discrimination of Hindus, Muslims, and Bene Israel Jews. At least 16,000 people were put on trial for heresy against Christianity and many more were subjected to untold levels of torture and violence. Francis Xavier was preparing to embark on a mission to China when he died on an island off the southern coast of Guangdong province. I was not aware of any of this then. I was encouraged to believe that he was a great saint who brought Catholicism (and god) near to all of us.

When I was 24, my grandmother passed away (1926–2018). Her name was 萧曼兒 (Seow Mok Jee) and I renamed myself in her memory. Born in Guangdong, she escaped a Japanese attack on her hometown, first to Hong Kong and thereafter to Singapore where she eventually settled. We were not related by blood—my grandfather married her shortly after my mother was born and her biological mother disappeared / died.

Popo, as I call her affectionately, continues to be an integral part of my life and identity. Shortly before my parents got married, she too converted to Catholicism and was given a baptismal name: Michelle, the French feminine form of Michel, which is rooted in the Hebrew name Mikha’el, which is in turn derived from the question “mı̂ykâ’êl?,” meaning “Who is like god?” 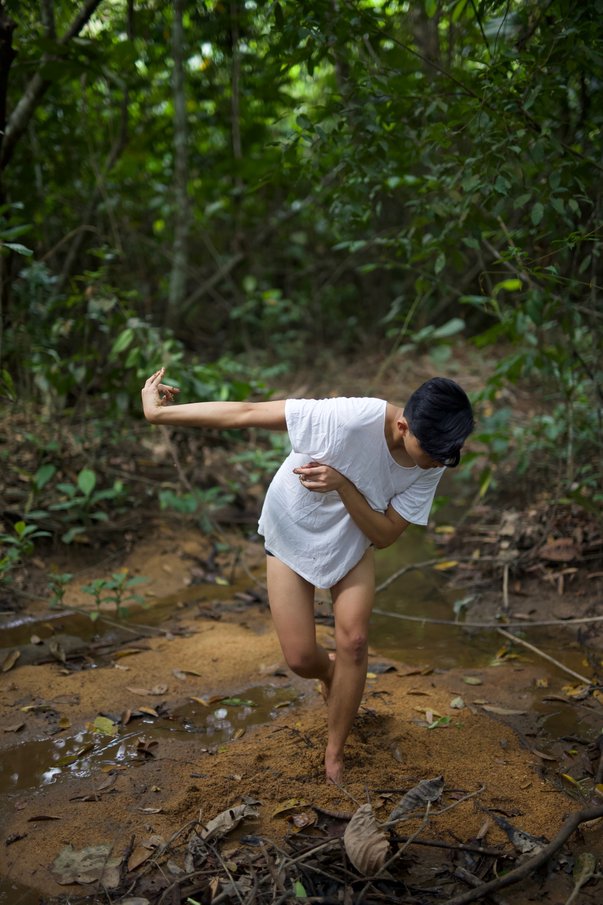 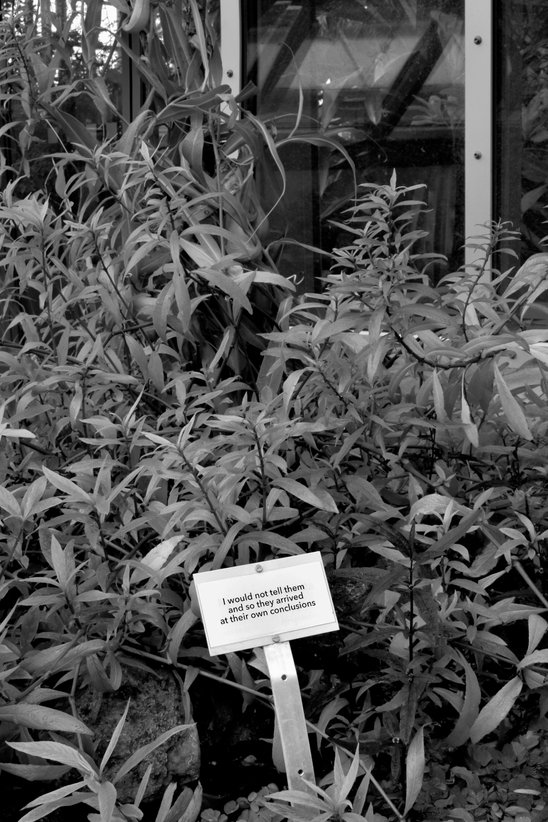 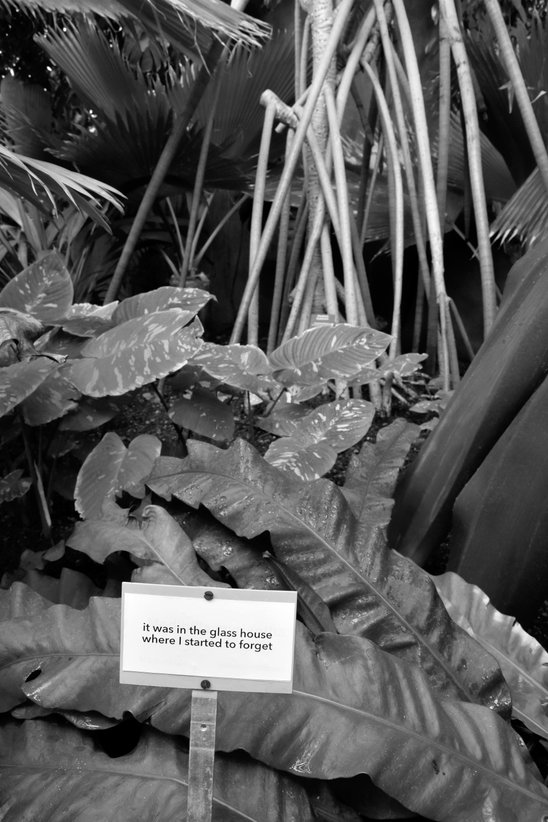 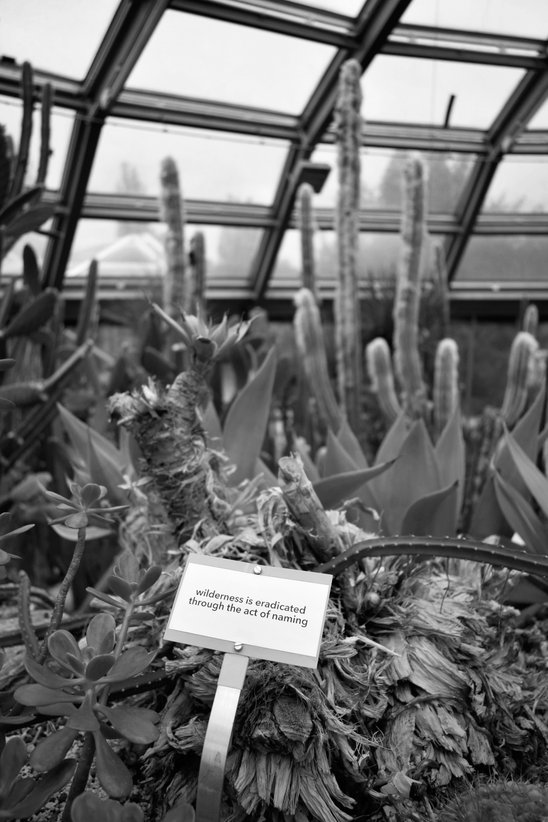 back to collaborating with jee chan 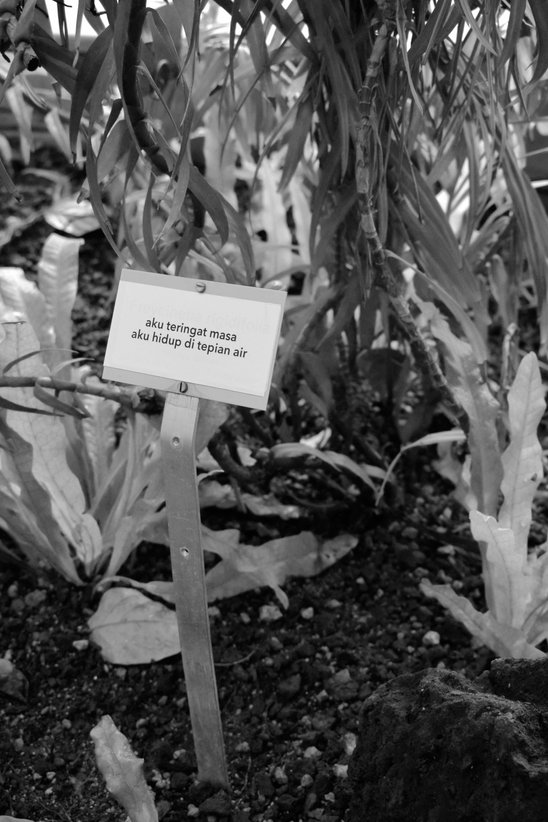 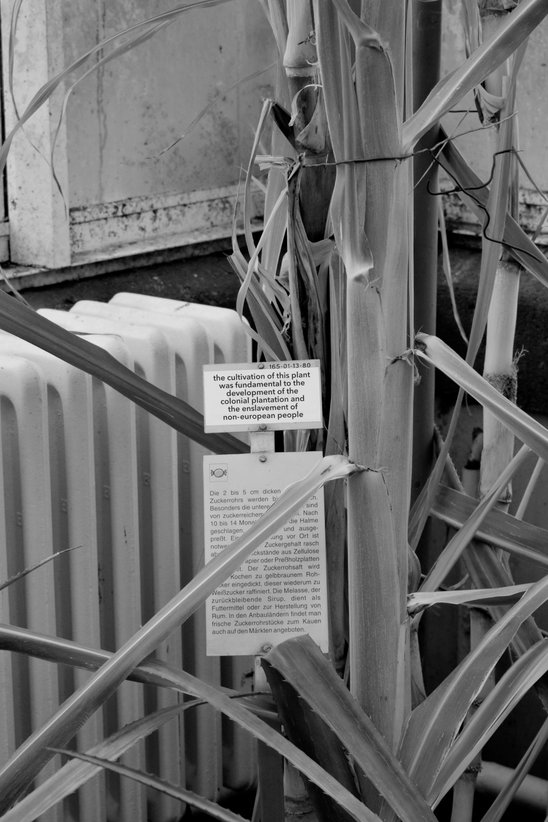 beyond repair is an assembly of materials by some of those who spoke, performed, and shared their research at the public program of the beyond repair study gathering — a series of seminars and workshops which took place in parallel to Ankersentrum (surviving in the ruinous ruin), Natascha Süder Happelmann's contribution for the german pavilion at the 58th venice biennale. this gathering was formed so as to acknowledge, study, and mourn what cannot be repaired, and to reach beyond — towards and within unstable forms and possibilities of survival, tumultuous self-organization, resistance, and commoning. the accompanying publication records and continues some of the conversations begun at the study gathering, to make them accessible to more, and move further.